The gold standard for executive authority in this world is clear. If you're the top guy, you get guarded by the U.S. Secret Service. This is the only explanation I can find for this picture. Here's the leader of Hezbollah, fanatical turbanist group. He's in full Iranian-style mullah/politician getup, but his guards look like Jean Reno Eurotrash versions of Dubbya's heavies, all the way down to the dark glasses and the expensive suits.

The effect for me is more Bad Hip-Hop Video than Imposing World Leader, but I bet it plays well back home. 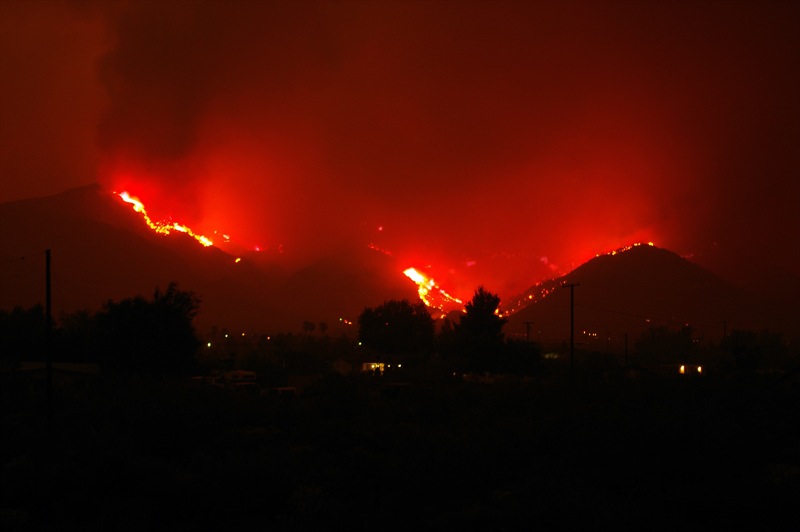 A flickr set of the Sawtooth fire from btwheeler. It's the Fire Hole.

The maniacs at The Legacy Project have finally put Orange County in the news for something other than meth and reactionary politics.

They turned one of the hangars at the disused El Toro Marine base into the world's largest camera and took pictures with it.

When I was growing up, the leftist material I read had a paranoid style. Things might look good, but I was living in a golden cage, they said. It was pointed out that big companies ran things behind the scenes, that dissent was marginalized, and that wars were created by and for profit. This had to be pointed out because things didn't look that way. In my comfortable middle-class liberal way I felt that my country was comfortable, middle-class, and liberal, and these writers wanted to shake me out of complacency. Consent is manufactured, they said! Look behind the pleasant exterior and it's a slaughterhouse! Your country is evil! Resist!

It was a hard sell, because things did look pretty good. I understood the arguments, but I still thought: this isn't Soviet Russia. Come on, guys.

There's no need for such arguments now. The people in charge openly tell us that the government is run by and for big corporations, and that this is for the good. The President is an autocrat and does as he pleases after consulting his CEO cabinet. War is considered good in and of itself, and opposition to war is treason. We have a national secret police and civil rights are suspended. The unions are busted and the nation now works part-time for a gigantic supermarket chain. Surveillance is more intrusive and better-organized than ever. Every single bit of 1970s anti-government paranoia from fiction, film, and the fevered imagination of conspiracy theorists is now proven correct, admitted, and heartily endorsed by the people in charge. It happened here.